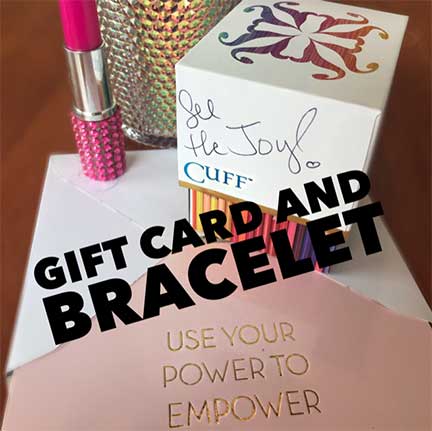 Wealth Wednesday – What is it?

Have you ever done something for somebody else JUST to be nice? Maybe paid for the person behind you while in a drive through? Helped somebody at the store when they were short on change? Well, that is the premise for Wealth Wednesday, with a twist.

Wealth Wednesday, started by Ray Higdon in his group Rank Makers talks about the importance of giving back but making it a financial transaction. Why? Isn’t it good to give anything we can to somebody else? Isn’t that enough? Well that depends on what your end goal is.  Many of us struggle with making money and holding onto it. We often feel we want to give more, help out more but we can’t at this time because we need all the money we have, or don’t have. Ray teaches this is a mindset and we need to overcome it. The amount we give doesn’t matter as much as the action of giving.

I choose to include a purchased gift, sometimes an item I have in my business or has been donated and a card or note with a short message that I feel has been pressed on my heart.  Sometimes the message may make no sense to me and I fight it thinking “Seriously? That doesn’t make sense,” but I believe God has a purpose for each of us and we can do great things if we only listen. So I have learned to write what I feel and leave it at that.

Sometimes the gift is in the message.

1)Early last year, I raced into Starbucks and grabbed a gift card and a couple of boxes of Girl Scout Cookies as there was a group selling cookies outside the store. And who can pass up those cute kids asking for help earning money? NOT me. I am a sucker everytime!  Well, I sat down and wrote a short message on a card ( I keep a handful of cards in my glove compartment for Wealth Wednesday.)  I wrote “You are Seen! Never give up as change is just around the corner if you believe.” Then I gave the card, the Starbucks gift card and a box of cookies to the staff at Starbucks and asked them to do what they do.  Pick somebody!

*Of course I also gave a box of cookies to the staff. How could I not?*

A few days later, while grabbing my much needed coffee, one of the employees pulled me aside to share a story.  A young man had come in out of the cold  and rain. He was homeless, on a bicycle and didn’t ask for any help, but was searching for enough change to get a coffee. He was maybe 20 years old if that. The employee said he finally asked him how much it was for a small coffee with nothing in it.  Then went back to counting his change.  When he started to walk out, head down, obviously not having enough money, the employee walked over and asked if he needed something to drink.  The young man said he didn’t have enough, to which the employee simply stated “please come back.”

He went on to explain ” We have a customer here who leaves a gift for us to give out to somebody who needs it.  Maybe they are having a bad day, or just a little short on cash. Maybe they just look like they could use a smile. She left this card and these cookies as well this time and asked me to give it to somebody I thought could use it.  The only thing asked is one day in the future  when you can, please pay it forward.” With that he handed the young man my gift. He said the young man had tears in his eyes as he read the note I had so quickly written out and instead of spending all of the money that day, he saved some to come back a few times.  Each with a smile on his face.

2) Grabbing a coffee again, I was once again pulled aside and had another story shared with me about a recent recipient of  a Wealth Wednesday gift I had left previously. This time I had left a card stating “You are a blessing. What you do matters, even when you think it doesn’t.  Look for the joy in life … Please wear these bracelets and think of their messages when you feel like life is too much. Thank you for all that you do! ” This was given with a Gift Card for coffee and very special bracelet set from an amazing company The Rustic Cuff, thanks to a generous donation from its owner,  Jill Donovan.

Her bracelets were engraved with inspirational words; “joy” being one of them.  Well, the employee went on to say that a woman came in looking tired, frazzled and near tears. She was exhausted and seemed at the end of her rope, so as she ordered, he reached into his drawer and pulled out my gift.

He handed them to her saying “a regular customer has left this for me to give out to somebody I felt needed it. I think you could use a smile. Please just pass it on someday.” He said she cried when she read the card and then the bracelet, explaining how much it meant to her. You see she was a 911 operator and just getting off a long shift. A shift where she had lost a life with her on the phone. She was distraught and sad and had felt overwhelmed. The simple gift made her smile. The message seemed made for her and  she left feeling a little bit better I believe.

3) I think my most memorable story was of one particular well dressed young woman who came in to get a coffee. Although this young lady seemed to have it all, the employee said “she seemed sad.”

The previous week I had dropped off a gift card, another box with two bracelets saying Hope and Joy and a card that was short and to the point. The message said “You are important! You matter! Never forget that even when times seem overwhelming, YOU are important to somebody! You are needed! You are loved!”

Although he did not know what it was about her that drew him, he reached into his drawer and asked her if he could give her something.  She waited to open it until she sat down waiting for her coffee. He said he watched her and saw her tear up as she read the note. Said she cried as she opened the box and saw the inscriptions and sat crying softly as she put the bracelets on.  He said he felt uncomfortable as he took her coffee to her and asked if she was ok. She nodded and said yes and thank you. That she appreciated the gift and then left.

A WEEK later that same lady returned. The store was surprisingly empty so it was obvious when she walked in. She same in and walked up to  the counter and started talking. She thanked them for the gift the week before, saying it had changed her life. That she had thought her life was over, that she had contemplated ending it and yet their small action changed her life.  Then she dropped a tip in the box and walked out smiling.

A tip that was over $50 as I recall.  The amount slips my mind as it was insignificant other than to show the amount of my gift card meant nothing. This lady did not need money…she had plenty of it. She needed something else. My simple gift had somehow touched her and changed her lifes direction all because I opted to play Wealth Wednesday and give back.  So I ask you…how are you giving back?

Wealth Wednesday or Pay it Forward is about giving of yourself. It doesn’t have to be big. It can be simple and small, as it is the act itself that blesses somebody. That selfless act of helping another person when you don’t have to; of giving to somebody you don’t even know can often bless both parties.  It blesses both the reciever and the giver, so why aren’t more people doing it?

Hearing how my simple act has blessed somebody touches my heart tremendously.  It blesses me with a gift that is priceless…

I met Jill in Oklahoma at a convention for our company. Jill has such a giving spirit and selfless outlook on life. I sat in awe of her as I listened to her talk about her story and the creation of  The Rustic Cuff   “Tickeled Pink”  doesn’t begin to describe how excited I was to get a moment of her time when she passed me in hall.  I shared with her how I loved giving back and how I practiced the Wealth Wednesday routine every week locally. She asked me if she could send me a few bracelets to include with my gift giving.

Jill Donavan did not send me a few bracelets. She blessed me with over 20 engraved bracelets that would help me show strangers that they were important.  I have to admit I was both honored and humbled to be the recipient of such a generous gift.  Want to know more about this amazing and generous lady? Jill truly is inspirational in all that she has gone through. Take a moment and read about her. Better yet Google her… read the story about her humiliating appearance on Oprah and how it changed her life.

Do you have practice Paying it Forward or Wealth Wednesday already?  Do you have a fun story or sentimental story you would like to share?  If so, let me know. I would love to hear… Have you ever been a recipient of a gift giving such as this? How did it make you feel?